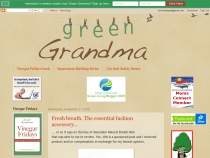 Dinosaur Adventure -- The Dinosaurs Have Come and Gone

Last weekend, we treated one of our grandchildren with an adventure... a dinosaur adventure. The middle of five grandchildren, Miss M has been obsessed with dinosaurs for most of her short life. We hosted a dinosaur party for her 5th birthday, complete with a dinosaur egg hunt, pin the tail on the dinosaur, and a visit from Polly the paleontologist. The next year, my husband and I took Miss M to DuBois, PA for a weekend that included a visit to Doolittle's where they've set up an impressive display of life-sized animatronic dinosaurs in a huge warehouse. Our delighted granddaughter had the opportunity to get up close and personal with the dinosaurs, dig for fossils, and ride a dinosaur, all for the at-that-time price of $3! 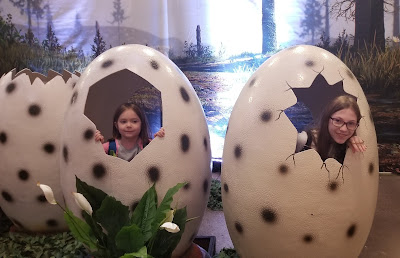 For Christmas, we gifted her with another visit to see dinosaurs; this time right outside of Pittsburgh at the Monroeville Convention Center. The traveling show, Dinosaur Adventure, was in town for 3 days and Miss M was once again delighted. She wanted to take her sisters along, but one of them was sick, so just her older sister joined us for the experience. The ticket prices ranged between $20 and $55. For the higher amount, you could ride all the rides and do all the activities.

The kids had a lot of fun and that is what mattered most. But to be honest, there were things I wasn't too impressed with. For instance, some of the dinosaurs weren't in the best of conditions, with rips in them and poor construction that gave everyone a glimpse into the wiring. Often the joints just weren't put together too well.


The rides were unique, with Jurassic jeeps, walking ride-on-dinosaurs, and dinosaurs that raced around a track. I appreciated the disposable caps the kids put on their heads before donning helmets for the rides, thus preventing the spread of head lice, but it was incredibly wasteful. Rather, I think each child should have received a cap with their arm bands and worn the same one with each ride. Of course, we were able to think to hold on to the caps, but most people wouldn't have considered it. 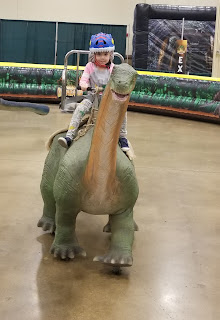 There were only 2 jeeps, which meant LONG lines to ride them. We opted not to wait. We did, however wait for over 30 minutes for Miss M to ride the very cute "walking" dinosaurs. I'd never seen a ride like it and thought it looked like a lot of fun.

The kids spent quite a bit of time in the inflatable maze and slides, but I was appalled by the lack of supervision there. The sign clearly stated that everyone had to wear socks and had to be taller than or shorter than the measurement posted. However, there were toddlers, kids carrying infants, barefoot kids, older (thus taller than allowed) kids, and basically total chaos. There was an attendant present, but he just sat on a chair and looked at his phone. Like I said, I was appalled. 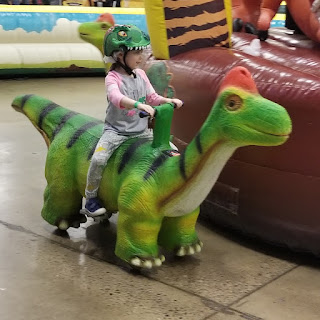 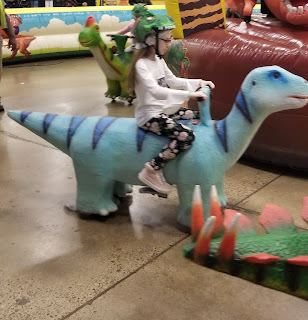 The shows were fair and no times were posted, so we waited a few times and eventually left because nothing happened. We did catch two of the "performances" however, and were not impressed. 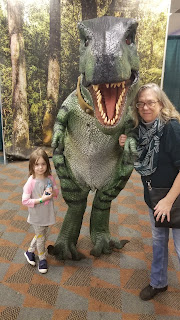 One thing that did impress me was the huge walking dinosaur that came out and interacted with the guests. He patiently posed for pictures with anyone who wanted one. There were also a couple of baby dinosaur puppets expertly operated by their handlers as they walked through the crowd, allowing the children to pet the dinosaurs. But you had to watch out -- they were biters!

Miss M has a problem with gluten, so there wasn't anything for her to eat in the concession stand. Even the fries were coated with breading of some sort. That was disappointing. I didn't think to take snacks with us. 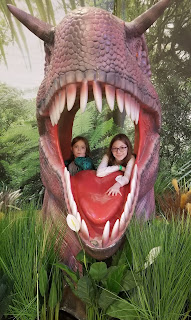 As I said, the kids had fun. They wouldn't pick up on the things I was critical of. But after being at Doolittle's in DuBois, I did have something to compare Dinosaur Adventure to and I wasn't impressed. If you're able to get to DuBois, I recommend you give it a try.

Here are some more highlights that kept a smile on Miss M's face. 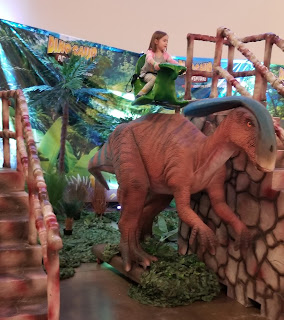 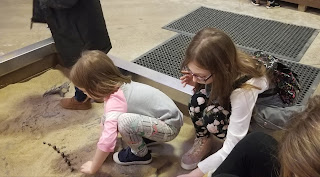 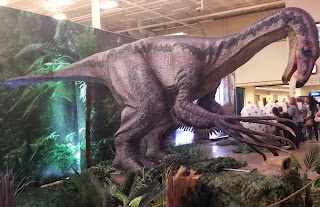 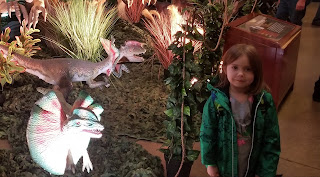 Finally, this sign greeted us upon entry and I immediately worried that quality control wasn't a priority for this organization. "Oppurtunity".... Really? Looks like proofreading is going the way of the dinosaurs... it's practically extinct.

Leave a Comment
submit a review Join our blog team

Proud Member of The US Family Guide Network